Babies all grown up!

Well, nearly all grown up - no eggs but the rooster is crowing!  I'd love to keep him because he is gorgeous!  If he were a keeper - his name would be Nilfisk, the hen that matches him would be Miele, BUT the crowing will be an issue, so we have been calling him Col. Brunswick as he will most likely end up as a stew - sad but that is the life of a male chicken.  At least he has had a great life since June - pecking, running around, being a general PITA to the older hens - a factory-raised male chick is tossed in a bucket then on to the grinder to end up as protein meal or something. 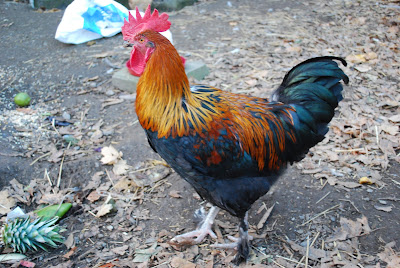 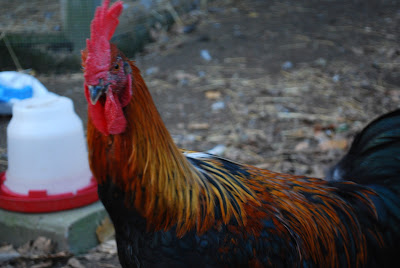 Isn't he something?
So that leaves me with 4 young girl-chickens or pullets - since they are not laying yet - The small grey hen is "Mouse", the two huge grey fluffy hens with the copper feathers around their necks are "The Pennys"  then the big fluffy black hen with the copper feathers who would have been Miele is probably going to end up Elvira (Mistress of the Dark) since she tends to exit the coop at night when I go hunt for eggs, and poke around the food! 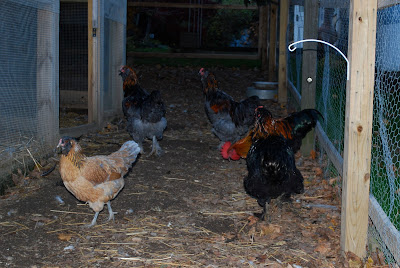 Brunswick and one of the Pennys 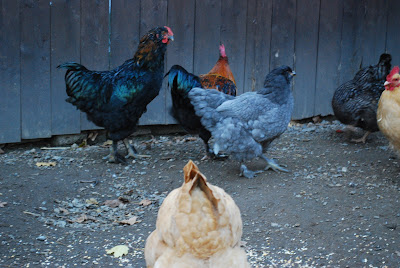 Elvira, Brunswick, Mouse and a Penny with the two Bettys (yes, that is a Betty chicken butt) 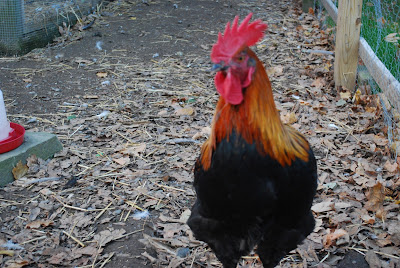 Col. Brunswick the handsome one! chick number one hatched on Wednesday, a teeny grey ball of fluff with feathers on it's feet. Just a few days prior, the nests looked like this: Though most of the time they actually looked like this: At this point we belatedly moved them into the Nursery coop - a box on the ground level of the inner run so no chicks fall off the ramp and everyone has privacy: The Chickens are Moulting!

They are actually nearly done moulting -thankfully - moulting combined with shorter days means not many eggs, but the new feathers are lovely! Here you see one chicken mid-moult - actually she is over the hump, should have seen her last week! The old feathers ready to go are browner - this is the last one to go then everyone will have fresh new feathers! The coop complete with the new motion-detection flood lights! Next will be Wi-fi and a hot tub..... (That's Ethel in the doorway, and Aggie in the foreground)