I have had many many people ask how the ladies are doing over the winter. Rest assured, other than complaining loudly and frequently about the snow, they are fine! Both the Buff Orpington (the fluffy caramel basket-ball chickens) and the Barred Rock (the smaller speckeled hens) are both geared to northern climates. The Ameraucanas are not as well feathered, so I am giving them additional protection. Ethel and Aggie, the Ameraucanas have not laid any eggs for a couple three weeks now, but should start up again as the daylight increases and it warms up a bit. The Betty's (Orps) are still laying, they are down to a bit less than one egg a day between the two of them on average, the same with the Rocks (Mavis, Mini and Lulu). I am getting 1-3 eggs a day, with an occasional 4th.
The coop and run have had some winterizing: 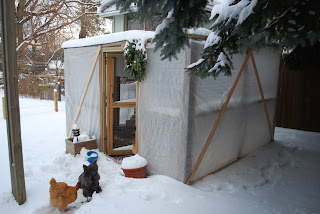 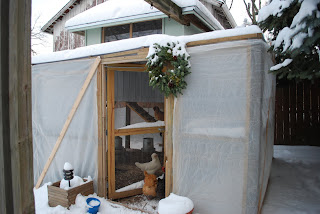 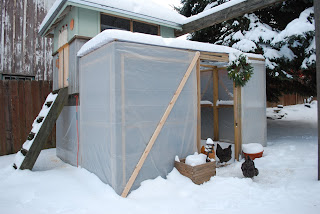 First, we are using a heater base for thier water so it will not freeze, then we wrapped the wire part of the run in plastic to cut the wind. I tossed in another 2 inches of pine bedding on the floof of the coop and we added a "sun room" to the run by installing some clear corrugated plastic roofing over the front left side of the run in front of the coop, which nearly doubles the amount of dry area for the girls. In addition, I try and toss a head of lettuce, cabbage, a handful of green beans or some other veggie into the coop for them to peck at. They are missing greens.

They are not at all thrilled with the snow, though they still adore getting outside for a brisk walk, they tend to stay on the path or under the big pine tree. 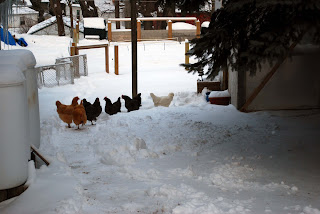 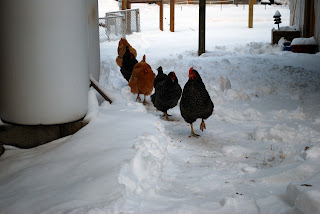 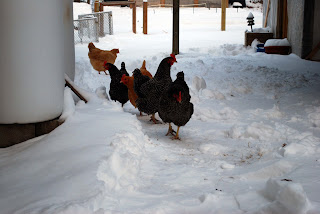