First Half of the Weekend!

Another gorgeous day! We have been up to a great deal over the last week:

Non-Backyard news:
#1 - a NEW TRUCK! It is yummy, and we love it! Honda Ridgeline, but being a Harry Potter kind of family, I keep referring to it as the Ridgeback, which would be OK if it were green, but it is white. It had it's very first christening big ole' blob of bird poop plopped on it the other day, so it is truely ours! Why a new truck? The big Battlestar Galactica white "mini"van had a leaky head gasket, and it finally stopped running.

#2 - Elder darling son got into Carnegie-Mellon! YAY! He is pretty sure this is where he will go. We are all happy and relieved!

Back to the Backyard:
It is all chicken coop all the time! Got a ton done today: 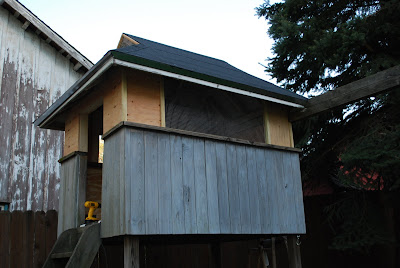 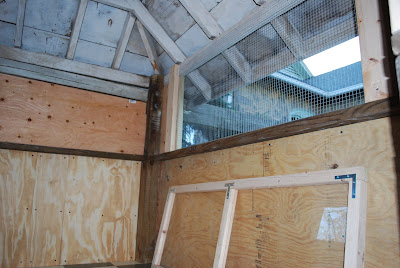 (ignore the underwear on the clothesline!)

There are nice big screened windows, front and back. Leaning on the wall is a plexiglass window
which we will put in for the winter time and remove in the summer. The door is made, should get the second window and the door finished tomorrow, and hopefully finish the run next weekend, then I think a thrift store run will be necessary because really, such a glorious coop will need a chandelier don't you think?

While Dave was working on the coop, I started cutting the winter rye in the beds so it can lie for a bit then get turned under. I had a brilliant idea: let the chickens do some of the work! So Roberta, Mavis, Lulu and Mini got to spend the day outside in the garden beds: 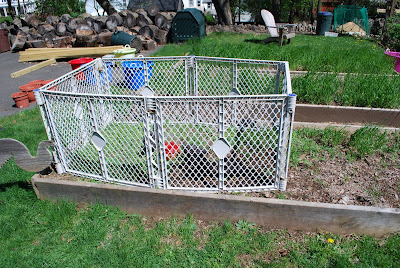 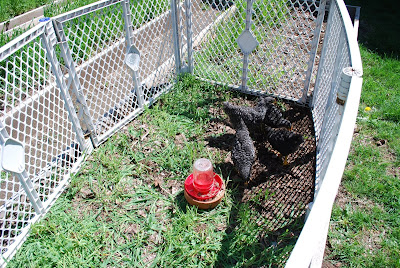 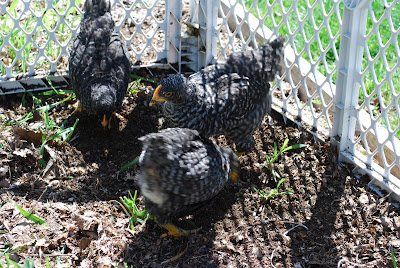 They were SO happy digging, scratching, picking at bugs! They will be out again tomorrow! The little girls are not really ready yet unless it gets warmer outside than expected. They have been named. The two Buff Orpingtons are Buffy (I know, clever huh? snort!) and Bella - went with the vampire thing, the Ameraucanas are Agnes, the light one, and Ethel, the darker one. Ethel has really nice wing coloring, I am curious to see what she looks like as she grows up. Interestingly, the chickens have yellow-orange legs, but the two Ameraucanas have greyish blue legs! 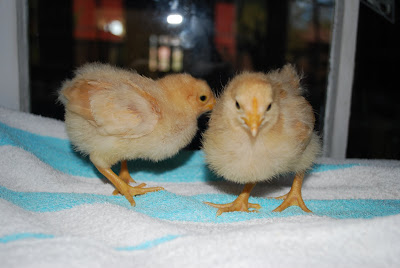 Bella (smaller one) and Buffy (bigger) 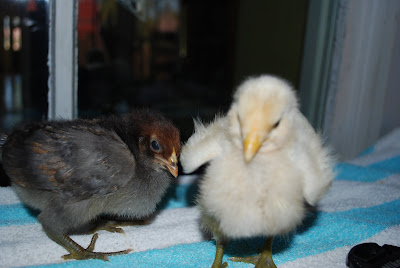 Ethel and Agnes (aka: Effie and Aggie) 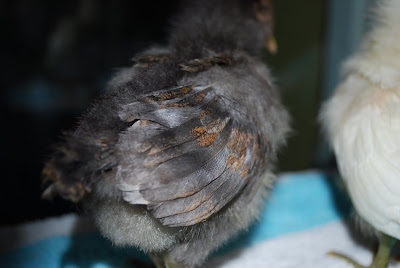 How about the brown shiny bits on Ethel's wings?
On the cooking front - I am having alot of fun with sourdough, so far the favorite is - waffels! I am using the sourdough starter from my new favorite book that I have a crush on: Urban Homestead, from the folks of the Homegrown Evolution blog which is my newest blog crush. The blog is really interesting, funny and chock full of information on more things than you can imagine from beekeeping to backyard eco-systems to bicycles and garden gnomes. 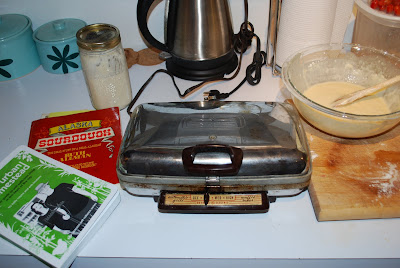 So - you get a quart-size mason jar and put in a cup of unbleached flour and a cup of warm water and stir it all up. Cap it loosely and set it on the counter. EVERY MORNING remove a half a cup and add a half a cup of flour and a half a cup of water. After a week or so it should be smelling all yeasty-like and be pretty bubbly. Then you can stop tossing the extra you pour off every morning and make yummy stuff with it like pancakes or waffles. I got this recipe from an old sourdough cookbook my friend Molly gave to me awhile back - Take a couple of mornings and don't pour off any starter from the jar, just add the flour and water so you have enough starter to make the waffles with about a cup left over to keep the starter going:

2 Cups starter
2 Tbsp sugar
4 Tbsp cooking oil (I used half melted butter)
1 egg-lightly beaten
1/2 tsp salt
mix these all together, (remember to add flour and water back into the starter jar) and get your griddle ready. Right before you are ready to make the waffles, stir 1 tsp of baking soda with about a Tbsp of water and stir it into the batter - don't beat it, stir it in gently so as it begins to foam up a bit, you retain the bubbles. Cook the waffles - eat them! You can use the same recipe for pancakes. 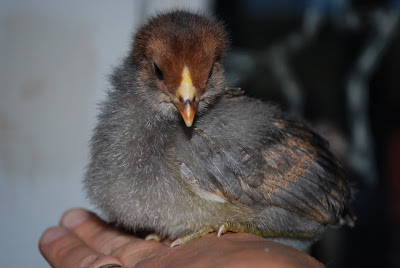